One of the most prominent and persistent stereotypes about Jews is that they are greedy and avaricious, hoping to make themselves rich by any means. They are seen both as relentless in the pursuit of wealth and also as stingy misers determined not to let any money slip from their grasp. They are imagined to exert control over the world’s financial systems, but are also accused of regularly cheating friends and neighbors out of a buck.

Antisemitism Uncovered video on the antisemitic trope of greed.

Sometimes the accusation of Jewish greed comes from observations or assumptions about Jewish wealth, perceived as inherently undeserved. While, as of a 2016 Pew research report, American Jews, as a whole, do represent the highest-earning religious group in the United States, more than half of American Jewish households earn less than $99,000 per year, with 31 percent earning less than $49,000.1Pew Research Center, “How income varies among U.S. religious groups,” Oct. 11, 2016, https://www.pewresearch.org/fact-tank/2016/10/11/how-income-varies-among-u-s-religious-groups/. To demonize the economic privilege of wealthier American Jewish households as “greed” or as a hunger for power is to imply that such wealth is necessarily undeserved, foreclosing the possibility that the household income of Jewish high-earners reflects values of hard work and sincere commitments to the ethical, medical, legal, cultural and other social fields that our societies reward.

The stereotype of Jewish greed took hold in the Middle Ages, when Jews were frequently associated with money. Jews typically had restrictions placed on their economic activity and were sometimes prohibited from owning land. As described earlier, sometimes the only option available to earn a living in such circumstances was through high-interest crediting, a role for which Christian rulers sometimes recruited Jews, as Christians were prohibited from it. This made for a complicated and tense dynamic between Jews and Christian society that lasted well beyond medieval times. It made it easy for leaders to position Jews as a scapegoat, as the cause of the common people’s financial woes; it also compounded the perception among some Christian theologians of Jews as immoral and devoid of virtue.

Jews were often made the villains in literature and art of the time, reflecting a widespread depiction of Jews as unscrupulous, money-hungry and working against the interest of the honest citizen. A famous character in literary history is Shylock, the greedy Jewish money lender in Shakespeare’s Merchant of Venice. Eventually this stereotype worked its way into modern vernacular: “To Jew someone down” became a common expression meaning to bargain unscrupulously for a lower price.2Ronald J. Berger, “To Be or Not to Be: The Holocaust and Jewish Identity in the Postwar Era,” Humanity & Society 31, no. 1 (2007): 27.

The charge against alleged Jewish greed has continued into the 21st century. In 2006, for example, Ilan Halimi, a 23-year-old Jewish Frenchman was kidnapped, tortured for three weeks and killed by a gang in Paris that was hoping to extract $500,000 in ransom money from his family. They had assumed that, because he was Jewish, he’d be rich. But in fact, Halimi was a cell phone salesman of modest means whose working class North African family belied the stereotype.3Julia Neuberger, Antisemitism: What It Is. What It Isn’t. Why It Matters. (London: Weidenfeld & Nicolson, 2019), 126-127.

Some Jews continue to be stereotyped as corrupted by an insatiable appetite for money and are often accused of hoarding wealth that they use to bribe people in power. Some continue to assert the false belief that the Jews pull the strings of the world’s financial markets. There are numerous conspiracies, many centered around the Rothschild family, about Jewish control of the economy and important economic institutions like the U.S. Federal Reserve and the International Monetary Fund. Underpinning such belief is the idea that Jews are hungry for access to money and control over it.4ADL, “Jewish ‘Control’ of the Federal Reserve: A Classic Anti-Semitic Myth,” https://www.adl.org/resources/backgrounders/jewish-control-of-the-federal-reserve-a-classic-anti-semitic-myth.

Eventually this stereotype worked its way into modern vernacular. “To Jew someone down” became a common expression meaning to bargain unscrupulously for a lower price. 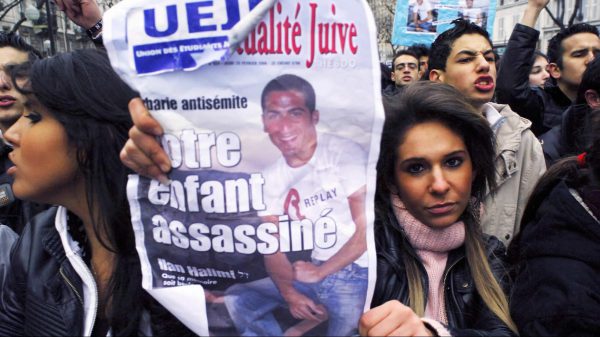 A Paris demonstration against antisemitism in memory of Ilan Halimi, who was tortured for three weeks before he died of his injuries. His kidnappers believed his family was wealthy because they were Jewish.
Pool Brunet/Luyssen, Demonstration Against Racism and Antisemitism in Memory Of Ilan Halimi in Paris, France (2006), photo, Getty Images https://www.gettyimages.com/detail/news-photo/demonstration-against-racism-and-antisemitism-in-memory-of-news-photo/124078749 https://www.thedailybeast.com/a-horror-story-of-true-life-anti-semitism-in-france

Keeping these truths in mind, we must remember that even when it’s intended as a compliment, statements like “Jews are good with money” or all “Jews are well-off” contribute to a dangerous stereotype.