The myth that Jews collectively murdered Jesus, also referred to as “deicide,” has been used to justify violence against Jews for centuries. Historians as well as Christian leaders have agreed that the claim is baseless.

Jesus was crucified in Jerusalem sometime around 30 CE.1Philip A. Cunningham, “Jews and Christians from the Time of Christ to Constantine’s Reign,” in Albert S. Lindemann and Richard S. Levy, Antisemitism: A History (Oxford University Press, 2010), 47. And Pontius Pilate — then serving as the Roman prefect (or governor) of Judaea — both presided over the trial of Jesus and gave the order for his crucifixion.2Helen K. Bond, Pontius Pilate in History and Interpretation (Cambridge University Press, 1999), xi.

Antisemitism Uncovered video on the antisemitic trope of deicide.

These events took place in a complicated social context, in which religion and politics were inseparable. In the New Testament, Jesus is said to have been tried in a Jewish judicial body called the Sanhedrin before being turned over to Roman authorities. Time and again, these circumstances have been cited as proof of Jewish deicide.

One of the earliest and clearest examples appears in Matthew 27:25, written several decades after the events. When Pontius Pilate second-guesses his decision to have Jesus crucified, Jews are caricatured as a bloodthirsty lynch mob.3Catherine Sider Hamilton, “‘His Blood Be upon Us’: Innocent Blood and the Death of Jesus In Matthew,” The Catholic Biblical Quarterly 70, no. 1 (January 2008): 82. This narrative is patently false. While certain leaders in the local Jewish community felt that Jesus’ teachings were politically subversive, experts have gathered that Jesus was not perceived as particularly threatening or enraging to the Jews around him.4Susannah Heschel, Abraham Geiger and the Jewish Jesus (University of Chicago Press, 1998), 234. Modern readers misinterpret the trial of Jesus as a conflict between Jews and Christians, but this does not square with the Jewish origins of Christianity or with the fact that Christianity emerged years after Jesus’ death. The only non-Jews present in the story of Jesus’ crucifixion were the Romans.

Despite this reckoning, the myth of Jewish deicide has persisted for millennia. What’s more, over the centuries, it has inspired derivative myths, such as accusations that Jews desecrate the Eucharist or poison wells to kill Christian villagers. Because the Qur’an explicitly states that Jews did not kill Jesus [Qur’an 4.157], a more common version of this trope in the Muslim world utilizes certain contested anecdotes from scripture involving Jewish individuals to make unfair and inaccurate generalizations that collectively accuse all Jews of being killers of divine prophets.

Very few details of Jesus’s crucifixion have been—or even can be—verified as historical fact. 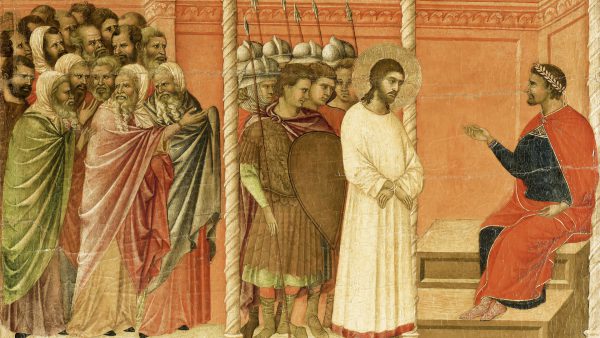 In the long history of Jewish scapegoating, deicide is the original and most damning false accusation. It set the terms for the most foundational Christian theological condemnations of Jews and Judaism within contexts ruled largely by religion.

The notion of Jewish deicide might seem like a harmless historical speculation, but in fact, those who spread the myth are usually less concerned with historical facts than they are with essentializing and demonizing Jews. In any case, historians and theologians agree: Jews are not responsible for the death of Jesus — not then and not now.