Jews account for approximately 0.2 percent of the global population. And yet antisemites believe that this tiny minority is not only on a quest for total world domination, but is already in control of banks, the media, industry, government — even the weather.1Pew Research Center; “Demographic Study of Jews,” April 2, 2015, https://www.pewforum.org/2015/04/02/jews/.

As recently as March 2018, a Washington D.C. city council member claimed that the Rothschild family, a Jewish family known for a bank they founded in Frankfurt, was “controlling the climate to create natural disasters they can pay for to own the cities.”2Peter Jamison and Valerie Strauss, “D.C. lawmaker says recent snowfall caused by ‘Rothschilds controlling the climate,’” Washington Post, March 18, 2018, https://www.washingtonpost.com/local/dc-politics/dc-lawmaker-says-recent-snowfall-caused-byrothschilds-controlling-the-climate/2018/03/18/daeb0eae-2ae0-11e8-911f-ca7f68bff0fc_story.html. Jews have also been blamed for economic crises, from the Great Depression to the 2008 recession.3ADL, “Financial Crisis Sparks Wave of Internet Anti-Semitism,” October 24, 2008, https://www.adl.org/sites/default/files/documents/assets/pdf/anti-semitism/united-states/financial-crisis-sparks-internet-anti-semitism-2008-10-24.pdf.

Antisemitism Uncovered video on the antisemitic trope of power.

At the core of this strain of conspiratorial antisemitism is the belief that Jews do not deserve to have power, regardless of what values they may stand for. Jews who pursue or occupy leadership roles in elected office or other stations of public life too often are deemed conspiratorial, rather than commended for their investment in concerns of the collective. The myth of excessive Jewish power also relies on historical claims of Jews controlling global affairs. Jews are cast as manipulative and conniving schemers who work in the shadows to advance an evil agenda. Antisemites often position themselves as truth-tellers, whose mission it is to unmask a supposed insidious Jewish plot to take over the world.

Antisemites blame social ills on baseless notions about Jewish power. The Rothschild family, for example, has been targeted with conspiracy theories after their Frankfurt bank grew to prominence in 19th-century Europe. These misguided condemnations have had less to do with the family or its behavior than with millennia-old stereotypes of Jews as disloyal, greedy abusers of power. In 1846, for instance, a political pamphlet circulated across Europe, falsely alleging that a patriarch of the Rothschild family used insider knowledge to profit from the Napoleonic wars.4Brian Cathcart, “The Rothschild Libel: Why has it taken 200 years for an anti-Semitic slur that emerged from the Battle of Waterloo to be dismissed?,” The Independent, May 3, 2015, https://www.independent.co.uk/news/uk/home-news/the-rothschild-libel-why-has-it-taken-200-years-for-an-anti-semitic-slur-that-emerged-from-the-10216101.html. The pamphlet was pseudonymously authored by “Satan.” In America, the Rothschilds have been blamed for instigating the Civil War, plotting to assassinate Abraham Lincoln (and later John F. Kennedy) and controlling the economy.5Michael S. Rosenwald, “The Rothschilds, a pamphlet by ‘Satan’ and anti-Semitic conspiracy theories tied to a battle 200 years ago,” Washington Post, April 20, 2018, https://www.washingtonpost.com/news/retropolis/wp/2018/03/19/the-rothschilds-a-pamphlet-by-satan-and-conspiracy-theories-tied-to-a-battle-200-years-ago/.

Ideas and fears about Jewish power were codified in the early 20th century with the publication of The Protocols of the Elders of Zion, an elaborate forgery, reporting a supposed meeting that never occurred. Tsarist secret police in Russia first circulated portions of The Protocols, purported to be leaked minutes from secret meetings of Jewish leaders who were conspiring to take over the world.6Jon Efron, The Jews: A History (Pearson, 2009), 313.

The Protocols falsely “revealed” a purported Jewish plan for global domination: how they would take over industries, infiltrate governments and use their stranglehold on the media to advance their hidden agenda. No such meeting had ever occurred, and the document was pure fiction, an elaborate forgery. Nevertheless, The Protocols attracted much attention, was translated into multiple languages and was disseminated around the world.7United States Holocaust Memorial Museum, Holocaust Encyclopedia, “The Protocols of the Elders of Zion,” https://encyclopedia.ushmm.org/content/en/article/protocols-of-the-elders-of-zion.

The text also gained traction in the United States among such noted antisemites as automaker Henry Ford, who published a series of antisemitic articles based on The Protocols in his weekly newspaper and which he would eventually republish in the book, The International Jew.9Leonard Dinnerstein, Antisemitism in America (New York: Oxford University Press, 1994), 81.

By 1925 the first of many Arabic editions of The Protocols emerged in Cairo. Since that initial publication, it has endured as a bestseller and, according to historian Norman Stillman, has remained widely available in bookstores “from Casablanca to Baghdad to this day,” praised by political leaders of the Islamic world.10Norman A. Stillman, “Anti-Judaism and Antisemitism in the Arab World Prior to 1948,” in Albert S. Lindemann and Richard S. Levy, Antisemitism: A History (Oxford University Press, 2010), 219.

The Protocols laid the groundwork for modern conspiracy theories about the reach and influence of “Jewish Power”: that the wealthy Rothschild family controls the world banking system, that the Federal Reserve is under the thumb of Jewish financiers, that Jews control Wall Street, that Jews plotted terror attacks and that Jews have fomented global conflict and war.11ADL, “Jewish ‘Control’ of the Federal Reserve: A Classic Anti-Semitic Myth,” https://www.adl.org/resources/backgrounders/jewish-control-of-the-federal-reserve-a-classic-anti-semitic-myth.

Today, in many parts of the world, The Protocols remains widely read and accepted as fact.12United States Holocaust Memorial Museum, Holocaust Encyclopedia, “The Protocols of the Elders of Zion,” https://encyclopedia.ushmm.org/content/en/article/protocols-of-the-elders-of-zion. World leaders such as Reycep Tayyip Erdoğan of Turkey or Mahathir Mohamad of Malaysia still blame a sinister Jewish conspiracy for their misfortunes.13Simon A. Waldman, “The Secret Jewish Plot Against Turkey,” Haaretz, Dec. 12, 2018, https://www.haaretz.com/middle-east-news/.premium-the-secret-jewish-plot-against-turkey-1.6742265; Josefin Dolsten, “Malaysia’s prime minister, who said he is proud to be called anti-Semitic, is speaking at Columbia University,” Jewish Telegraphic Agency, Sept. 24, 2019, https://www.jta.org/2019/09/24/united-states/malaysias-prime-minister-who-said-he-is-proud-to-be-called-anti-semitic-is-speaking-at-columbia-university. The Protocols is featured for sale at many book fairs across the Arab world.14ADL, “ADL Calls on Oman to Remove ‘Protocols’ and Other Blatantly Anti-Semitic Titles from State-Run Book Fair, February 26, 2019, https://www.adl.org/news/press-releases/adl-calls-on-oman-to-remove-protocols-and-other-blatantly-anti-semitic-titles. The Islamic Republic of Iran and its proxies peddle The Protocols as a sinister form of statecraft, enshrining it as policy and using it to justify their irrational hatred for Jews around the world and for the Jewish state. Such anti-Jewish prejudice arguably is one of modern Iran’s most impactful and far-reaching exports. Language and conspiracy theories from The Protocols still creep into the  modern lexicon — in tweets, social media posts, newspapers and out of the mouths of public figures and elected officials.

Now, in the dark corners of the Internet, on white supremacist websites and in underground chatrooms, promotion of The Protocols and the notion of an international Jewish conspiracy functions as a kind of perverse social currency. “Globalist” functions as a codeword for Jew,15ADL, “Quantifying Hate: A Year of Anti-Semitism on Twitter,” https://www.adl.org/resources/reports/quantifying-hate-a-year-of-anti-semitism-on-twitter. the “cosmopolitan elite” a stand-in for wealthy and erudite Jews accused of acting against the common man to install a new world order.16Ben Sales, “Senator’s speech on ‘cosmopolitan elites’: Anti-Semitic dog whistle or poli-sci speak?,” Jewish Telegraphic Agency, July 19, 2019, https://www.jta.org/2019/07/19/united-states/a-missouri-senator-gave-a-speech-opposing-a-powerful-upper-class-and-their-cosmopolitan-priorities-um.

The secret goals of the Jewish people are laid out in The Protocols of the Elders of Zion. They contain the Jewish plan for world conquest. 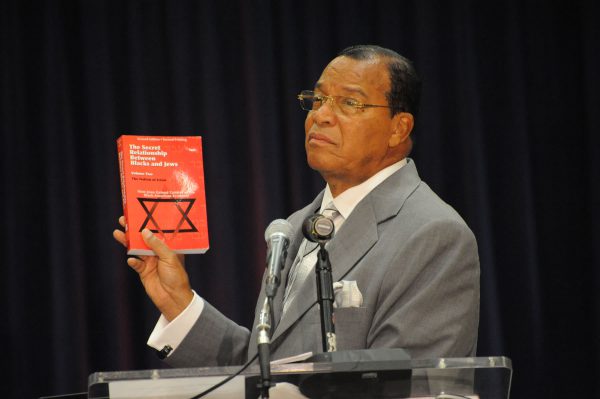 At times, this myth is invoked unintentionally. Some might not realize the historical roots of such antisemitic conspiracies. Such ignorance is one of the reasons we must educate ourselves and each other about harmful social myths. We also can take action to show where we stand. When alt right trolls took to targeting Jewish users on Twitter by adding three parentheses around their names to suggest an “echo,” or reverberation of Jewish power and destruction, some non-Jewish Twitter users placed triple parentheses around their own names in acts of solidarity.28Zoe Williams, “(((Echoes))): beating the far-right, two triple-brackets at a time,” The Guardian, June 12, 2016, https://www.theguardian.com/technology/shortcuts/2016/jun/12/echoes-beating-the-far-right-two-triple-brackets-at-a-time.

The great irony of the myth about Jewish power is that, historically, Jews have had very little influence or control over even their own fate. There is a difference between cultivating the resilience, discipline and drive necessary to survive adversity and lusting after power over others. The pogroms of the 19th century and the genocide of the Holocaust in the 20th century are just two tragic reminders from recent history of the powerlessness that Jews ultimately have experienced at the hands of despotic and murderous regimes.

Jews are not monolithic. They do not act as one to advance a particular, unified agenda. Their interests are diverse, as are their identities.