Antisemites frequently suspect Jews of holding allegiance only to fellow Jews and to a uniquely Jewish agenda. Jews are accordingly seen as untrustworthy neighbors and citizens, as if they are inherently disloyal — or have inherently dual loyalties.

One primary origin of this myth is in the New Testament: Judas is said to have betrayed Jesus. The name has since become synonymous with “traitor,” and this foundational story has been used to invoke accusations of Jewish disloyalty for thousands of years. The Quran and hagiographic Islamic texts also contain passages that question Jewish scrupulousness.1Norman A. Stillman, “Anti-Judaism and Antisemitism in the Arab World Prior to 1948,” in Albert S. Lindemann and Richard S. Levy, Antisemitism: A History (Oxford University Press, 2010), 212-214. Defining themselves against their roots in Judaism and the Old Testament, early Christian and Islamic scripture contain traditions of portraying Jews as wrongdoers who cannot be trusted. These traditions contributed to anti-Jewish measures throughout the medieval and early modern eras, especially in Christian Europe, where Jews were periodically blamed for communal ills, such as plagues or murders.

Antisemitism Uncovered video on the antisemitic trope of disloyalty.

During the Enlightenment, European nations heatedly debated whether Jews were worthy of civil rights. Some social commentators and politicians considered Jews physically unfit for military service and incapable of genuine patriotism. And even after Jews had gained legal citizenship in much of Europe, racial science denigrated Jews and other minorities. Nation-states often defined their own collective character against the Jewish “other,” perceived as the minority most able to pass as Christian and, thus, to deceive the Christian majority. One of the most infamous cases of the disloyalty charge is the Dreyfus Affair. While Dreyfus’ sentence was eventually overturned, the entire affair underscored a widespread mistrust of Jews.2Richard S. Golsan, “Antisemitism in Modern France: Dreyfus, Vichy, and Beyond,” in Albert S. Lindemann and Richard S. Levy, Antisemitism: A History (Oxford University Press, 2010), 144-145.

Following Germany’s defeat in World War I, Hitler and other antisemites baselessly blamed German Jewish soldiers for stabbing their army in the back. Hitler thus staked future victories for Germany on the eradication of Jews, whom he viewed as disloyal.3Doris L. Bergen, “Antisemitism in the Nazi Era,” in Albert S. Lindemann and Richard S. Levy, Antisemitism: A History (Oxford University Press, 2010), 199.

Throughout the 20th century, Jews unfairly accused of disloyalty have been blamed for fanning the flames of social and political unrest. Jews frequently were associated with the rise of communism and socialism, and cast as agitators.

Further west, despotic leaders continued to use suspicion of Jews to advance their own political agenda and solidify power in the postwar landscape. In 1953, Joseph Stalin concocted the “Doctors’ Plot,” which cast a group of Soviet Jewish doctors as disloyal citizens. The doctors falsely were accused of plotting to assassinate members of the Kremlin, jailed and tortured. Some historians have theorized that the affair was meant to lay the groundwork for a campaign of ethnic cleansing against Jews — which only was averted when Stalin died before the doctors could be put on public trial.12Heinz-Dietrich Löwe, “Antisemitism in Russia and the Soviet Union,” in Albert S. Lindemann and Richard S. Levy, Antisemitism: A History (Oxford University Press, 2010), 187-188.

In the United States, Jews likewise were subject to suspicion of their true allegiances. Despite having a Jewish Secretary of State and Jewish supporters, President Nixon thought a “Jewish cabal” in his administration was working against him, a distrust that perhaps stemmed from his belief that Jews were “born spies.”13Stephen J. Whitfield, “Nixon and the Jews,” Patterns of Prejudice 44, no. 5 (2010): 445, 447. Jews in public service have also been accused of having dual loyalties between the U.S. and Israel. As a former State Department official wrote in The New York Times, Jews who wanted to work on Middle East policy were for a long time viewed with skepticism:14Dennis B. Ross, “Memories of an Anti-Semitic State Department,” New York Times, Sept. 26, 2017, https://www.nytimes.com/2017/09/26/opinion/contributors/valerie-plame-antisemitic-state-department.html.

“When I began working in the Pentagon during President Jimmy Carter’s administration, there was an unspoken but unmistakable assumption: If you were Jewish, you could not work on the Middle East because you would be biased…Jews could not be objective and would be partial to Israel to the exclusion of American interests.”

Jews have been imagined as incapable of objectivity regarding Israel and have been assumed to be partial to Israel to the exclusion of American interests. 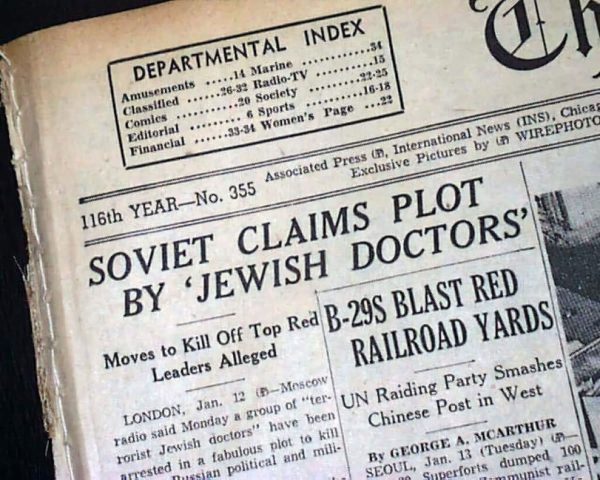 In an antisemitic campaign organized by Stalin in 1952-1953, a group of predominantly Jewish doctors from Moscow were accused of a conspiracy to assassinate Soviet leaders.
Soviet Claims Plot by 'Jewish Doctors' (1953), newspaper, The New Orleans Times-Picayune https://www.worthpoint.com/worthopedia/doctors-plot-soviet-union-leaders-1865604884

While many Jews feel a connection to Israel for religious, ideological, familial or emotional reasons, it is not so different from the way other ethnic or cultural groups have connections to their own ancestral countries. Korean Americans may feel similarly about Korea, or Indian Americans about India.

In a nation of immigrants, people can be loyal American citizens and still feel emotional attachments to other countries.